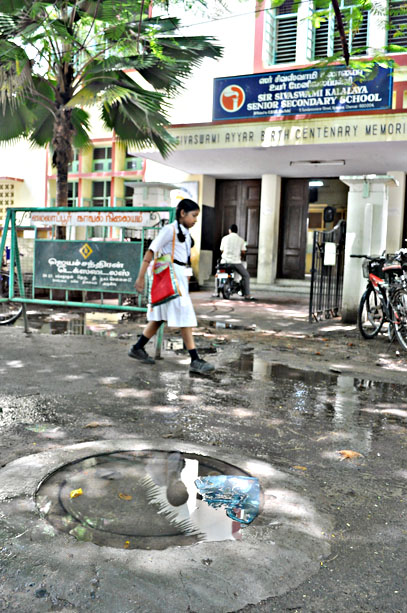 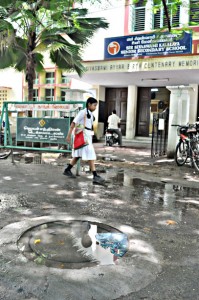 Since there are 2 major schools and a small schools and a creche in this zone, students are forced to negotiate polluted rainwater when they head to school and have to get back home.

The manhole in front of Sir Sivaswami Kalalaya Senior Sec. School, Mylapore has been leaking for the past few days.

R. Aruna, Vice Principal of the school says that, this has become a perennial problem in the area.

The problem becomes grave when it rains, says Aruna. The rainwater and the sewage mix and the children are forced to walk through it.

Repeated complains have been made to Metrowater but the problem remains, says Aruna.

She says she is anxious now because the rains are aggravating the problem and nobody in charge seems to be concerned.

On Thursday,  a senior engineer of Metrowater for Zone 10A said that the problem had been addressed and set right. A local engineer said silt had accumulated in the pipes and that had been removed.

– The photo here shows the leaking sewage on Sundareswarar Street in Mylapore.

<< If your area faces serious civic problem, report them to this newspaper. Send us a photo too. >>