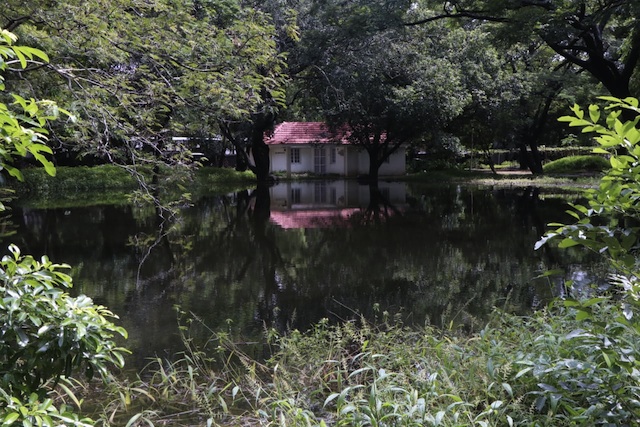 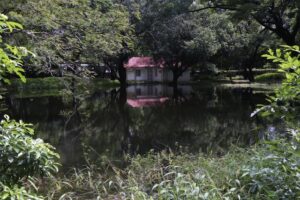 The Vasant Vihar campus of Krishnamurthy Foundation of India on Greenways Road gained something and lost something this monsoon season.

The large kuttai or pond on its campus overflowed. But close to 30 trees collapsed as cyclone Nivar hit the city.

“We are still working at removing all the fallen trees, ” says R. Gopal, the manager. “Because of the sandy soil even native species do not go deep and get a  firm hold here.”

The campus has been closed to the public since early this year due to the pandemic conditions and was due to re-open on January 1 but that has been postponed to March 2021 because a few staff on campus turned virus positive.

Says Gopal, “We cannot entertain our regulars and guests now but they can buy books and communicate with us online.”

The kuttai is at the core of the rainwater harvesting system on this six acre campus, with pipelines and filters tapping the rainwater that falls on the main road outside the campus walls feeding the pond.

Once filled, the water remains at decreasing level till about the onset of summer.

“Residents in campuses around us are always thankful to us because their grounds get recharged due to the water in the kuttai,” says Gopal.

If you need to access information and facilities that Vasant Vihar now offers now go to www.kfionline.org