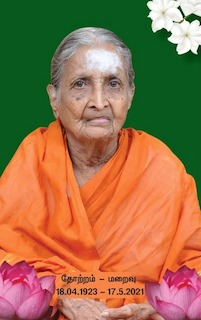 Parvathi Ammal, the grand old lady of the ‘Thandarai Vaidiyar’ family of Mylapore passed away on Monday, May 11 at 1.30pm at her residence adjacent to Sri Kapali Temple.

She was 99 years old and had no children but raised her sister’s children as her own.

She has left behind a large family of relatives, friends and  well wishers.

She was the wife of late T. K. Vaidiyalinga  Bakther and daughter-in-law of T. C. Kumaraswami Bakther who dedicated the silver kavacham to the Adhikaara Nandhi vahana of Sri Kapaleeswar Temple, Mylapore in the year 1917.

He contributed a portion of his income every month to the temple cause and also from funds he got by selling his house. He was also responsible for the construction of a portion of the steps at the  tank of Sri Kapali Temple.

He had also donated his wife’s pair of diamond studs to Kamakshi Amman (Ezharkuzhali Amman) at Kanchipuram.

The Bakther family has an artistic legacy and all family members have an artistic mind and are artists and doll makers for decades. The famous legendary artist Maniam who was an art director in many films happens to be Parvathi Ammal’s brother-in-law.

Parvathi Ammal was also a physician of native medicine which she had learnt from her father-in-law and had been practicing from her younger days.

She was a multi-talented person – expert in preparation of native medicines and oil, good at cooking, art and craft, tailoring, crochet and was a musician too.

She and her family had close association with well-known musicians like M. S. Subbalakshmi, Veena Balachander and Papanasam Sivam; they visited her often and dined with her, relishing exclusive dishes cooked by her.

The tradition of Margazhi bhajan culture was initiated and started by her family at her house along with  Papanasam Sivam who composed and sang the famous kriti “Kaana Kankodi Vendum” in 1917 by admiring  the beauty of the silver Adhikara nandhi vahana, donated by this family.

Parvathi Ammal, from  her savings, donated and fed many needy people and erected the neermor pandhal during the Panguni festival for decades.