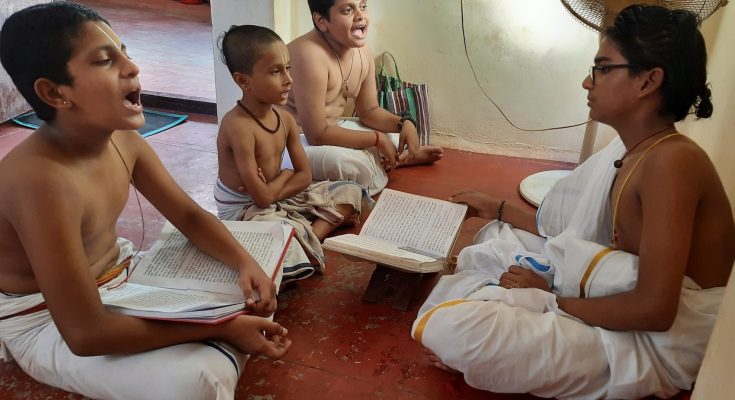 It is 9.30am on Friday (Oct 1) morning. 14 year KVR Sastha has been reciting the Krishna Yajur Vedam sitting all alone at the Venkatesa Perumal Temple on Mari Chetty Street for an hour as directed by his Vedic Acharya G Krishna Ganapadigal.

It is now a couple of years since the young boy made the trip from Hyderabad to Mylapore.

Shortly after 1pm, Sastha is back at the terrace, with an overhead thatched roof, of the Gurukulam on Kesava Perumal (Sannidhi) East street and is now teaching the first set of verses to three young kids not yet 10.They repeat the verses thrice after him.

There is joy in the face of Sastha. At this young age, he seems to have taken to the Vedas quite well. Not for him the TV Channels or going around the Mada Streets on a shopping spree.

All his interest is around the Vedas and he has been learning the Patham along with Krishna Ganapadigal’s younger son Pranavanathan at the Sri Vidya Saraswathi Maha Periya Niyama Adyayana Gurukulam, a few hundred yards away from the Vedantha Desikar Srinivasa Perumal Temple.

An interesting feature here is that the Vedic tradition is being passed on from one generation to another. For 14 years, Krishan Ganapadigal had learned the Vedas from his father Gopala Ganapadigal in Tirupathi, where the latter presented Veda Parayanam. 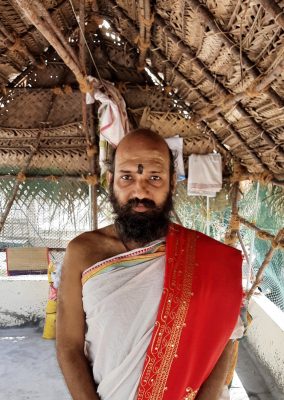 And over the last 7years, Krishna Ganapadigal has been initiating Krishna Yajur Vedam to his elder son Vishwanathan. Currently, the father is playing the role of Vedic Acharya to his second son who has just started out on Vedic Education in the last couple of years along with Sastha.

Just in the way he learnt the Vedas from his father, Krishna Ganapadigal now sees as his duty the passing on of the Vedic knowledge to his two sons. While the original plan was to initiate only his two sons into the Vedas as part of continuing the Vedic tradition in his family, a few other students too have joined this way of life, staying full time at the Gurukulam and learning the Vedas.

Krishna Ganapadigal’s wife has been a big source of strength in running the Gurukulam. She plays the role of the caretaker of the students and also provides the meals.

Currently there are six students at the Gurukulam in addition to the two sons of Krishna Ganapadigal.

One Comment on “A Vedic tradition passed on through generations. Here in Mylapore zone.”