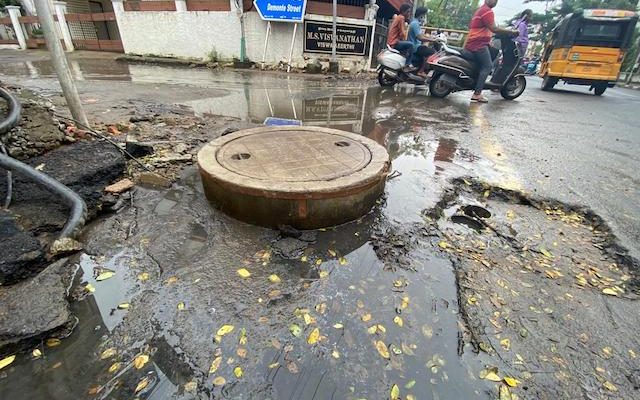 If the stink is unbearable and you are forded to wade through sewage-polluted water standing on the streets in many parts of Mylapore zone, it is because some key civic services have broken down.

When it became unbearable for residents off Demonte Street that is the key link from the seaside colonies to San Thome High Road, to negotiate the stinking, dirty waters on the main and side streets, some called up the MLA, others began to live with the mess since last weekend.

Sewage from the lines was flowing in reverse and spreading all over. The lines were choked; in San Thome, Mandaveli, St Marys Road, R K Mutt Road, Teynampet zone.

Mylapore MLA Dha Velu says the breakdown at the Metrowater pumping station off St Mary’s Road is causing this problem.  It appears that the main pipes have burst, that the lines could not take the overload.

The MLA said this Monday morning that work went on through the night to set things right and he hoped all would be well by noontime.

Metrowater’s teams have been seen at work at many spots. Jet-rodding lorries are deployed. But its social pages in recent days do not reflect Mylapore’s messy situation. On the sewage polluting many a street.