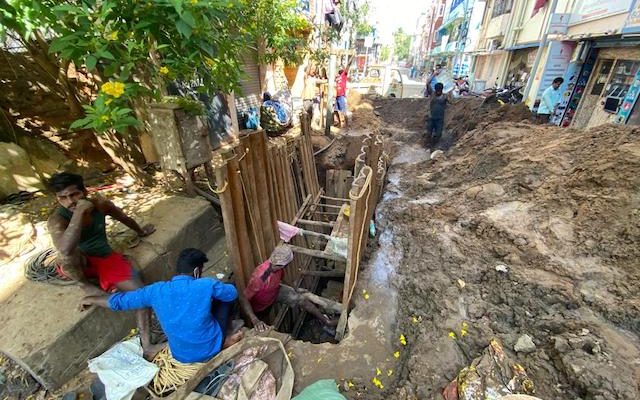 Metrowater officials say that sewage began leaking out from its pipe running on Solaiappan Street in Mylapore and hence they had to excavate the road and start work to set right the ‘pipe burst’.

Currently, a section of this narrow street is cut off for vehicular movement to allow for repairs to be undertaken.

A Metrowater engineer told Mylapore Times that the pipeline, which carries sewage to the pumping station on St Mary’s Road was leaking for some time when the monsoon was still active, and his workers used a standby method of transferring sewage manhole to manhole till the sun came out and allowed proper repairs to be undertaken.

Since the sewer line is laid some 18ft deep, the earth excavation work took time, he added.

He said the work will be over by Tuesday evening and the longish pit will be filled up.