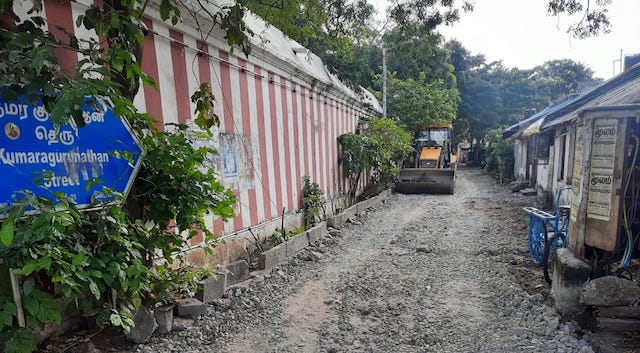 In the second half of last year, there had been plans to re develop the area on Kumara Gurunathan Street adjacent to the Sri Kapaleeswarar Temple which the temple owns.
This is the report ( https://www.mylaporetimes.com/2021/08/re-development-of-sri-kapali-temple-zone-residents-worried-activist-to-take-issue-to-court/)
That plan had been put on hold following reports in Mylapore Times which quoted experts on the importance of conserving a heritage zone and avoiding plans that only increase civic burdens.
Now, Kumara Gurunathan Street is being relaid since last weekend.
When the JCB vehicle landed up here on Saturday, the local residents were worried that the demolition plan had resurfaced again but were told that the workers were relaying the road and the plan was to complete this before Pongal.
– Report, photo by S. Prabhu