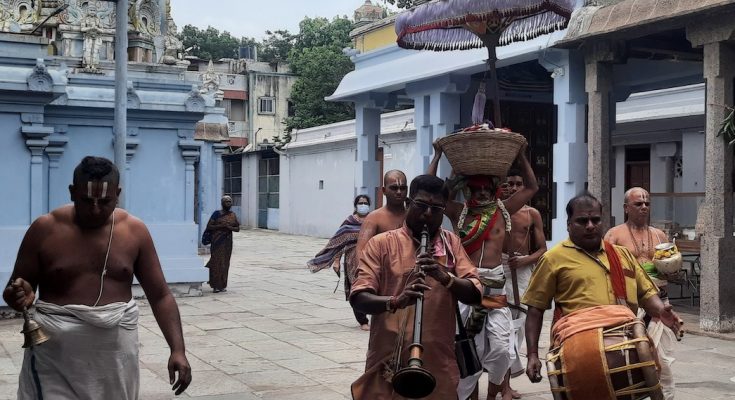 The three-day Pavitrotsavam got off to a grand start on Monday morning at the Madhava Perumal Temple in Thyagarajapuram. Priests from Thiruvallikeni and Nungambakkam were here to start the celebrations.
The homam kundams were lit with firewood and several kilos of ghee poured in. The Prabhandham members came together in good numbers and  began the recital of the first two cantos of Nam Azhvaar’s Tiruvoimozhi verses.
Through the morning session, there was a steady stream of devotees at the temple to be part of the utsavam.
Shortly after noon, the priests began draping each of the deities with the Pavitra Maalai. Amruthavalli Thayar, Bhoo Varaha, Ramar, Pey Azhvaar, Manavala Mamuni and Madhava Perumal all wore a colourful look with the Maalai around them.
The priests also placed the sacred Maalai at the Madapalli from where the prasadam is prepared each day for the Lord.
It had been a long morning session for the kainkaryapakas at the temple. It was past 1pm when the Prabhandham members presented the final verses for the morning session.
Sacred Puliyodharai was then distributed to all those present, bringing to end the first morning of the utsavam.
– Report, photo; S. Prabhu