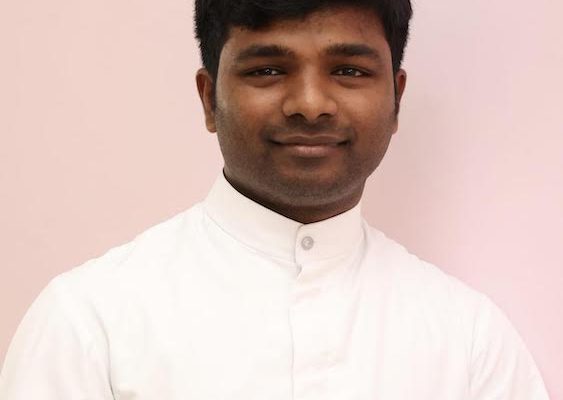 Deacon R. Sathish who served at Our Lady of Guidance Church in R. A. Puram has been ordained as a Catholic priest of the diocese of Madras-Mylapore.

The ordination was a grand one and held at St. Thomas Cathedral, San Thome in mid-August.

Fr Sathish was born to Gabriel who is a mason by profession and Annamary, a homemaker in Park Town, Chennai.

He did his entire schooling in boarding schools. From Class 1 to 5, he studied in Saint Joseph’s Primary School near Mahabalipuram. From Class 6 to 12, he studied in St. Joseph’s Higher Secondary School, at Kovalam.  Here he got the opportunity to observe many priests, was inspired by their work and he decided to become one himself.
After he finished his schooling, he joined the Infant Jesus Minor Seminary in 2010 near Tiruvallur. He then joined Loyola College in Chennai to pursue a degree in BSc mathematics. After completing his degree, he studied in Vellore diocese before joining the Poonamallee Sacred Heart Seminary to study philosophy.
He then served for a year in Vellavedu Minor Seminary after which he studied Theology for four years at the Sacred Heart Seminary.
He was appointed as deacon to serve at R.A. Puram where he assisted Fr. Y. F. Bosco, parish priest and Fr. Lourdes Marcel, Asst parish priest.
– Report by Juliana Sridhar