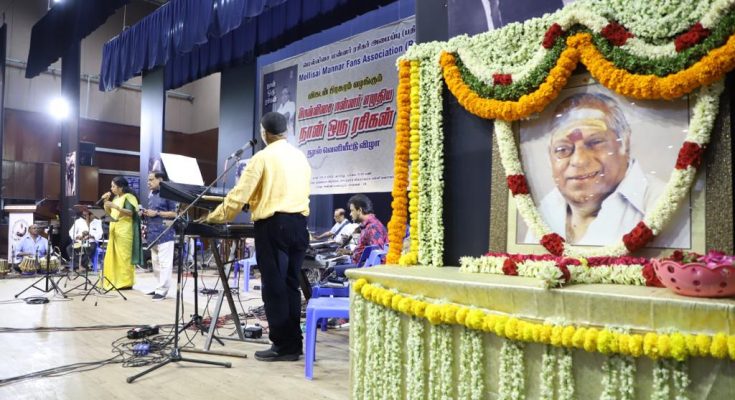 Fans of celebrated music director M S Viswanathan ( MSV) are a huge community and a keen one at that.

Some 1000 plus of then were at Kumari Raja Muthiah Arangham in MRC Nagar on a cloudy Sunday evening, to be at the launch of a book on MSV, based on a series of interviews he gave Ananda Vikatan magazine. The book is titled ‘Naan Oru Rasigan’.

The fans, mostly people in their 60s and 70s enjoyed some memorable MSV film songs presented by a music troupe of seasoned musicians. Many were seen recording the show on their mobiles and keenly listening to the anchor precede the songs with anecdotes.

And when some leading lights of the film world came on stage to release the book, at which many members of MSV’s family which is based off San Thome High Road were also present, the fans sat up to listen keenly to each speaker’s stories on MSV.

MSV’s son, Prakash set the ball rolling with a great story – of how the music director had hailed a taxi outside AVM Studios one evening and later at home realised to his shock, that his dear harmonium, which has always been with him through his career, was missing.

Calls went out to search for the instrument but it could not be located. They then get called wellknown PR agent Film News Anandan to not only put out a press report in Dina Thanthi newspaper but also released an advert on the ‘missing’ harmonium. MSV was not only upset but did not sleep nor eat a morsel. Only 36 hours later did they get a call from a taxi driver who said he had taken MSV home, had rushed to Madras from his hometown, had checked the taxi and located the harmonium.

The event was hosted by Mellisai Mannar Fans Association.

Proceeds from the sale of this book are to be donated to the Viswanathan-Kannadasan Trust.