The famed Lakshmikanthan murder case of 1945 not only stunned and engaged people in the 40s and 50s but stayed in the memories of many through the 60s and 70s. Such was the sensational nature of the case which featured top film stars of that era.

Now, veteran theatre-person P. C. Ramakrishna ( seen in the second photo) is going to present the premiere of his play based on this famous case. The show is to be at Narada Gana Sabha, on Nov.26 evening, with four city sabhas joined hands to co-host it. Ticketed. 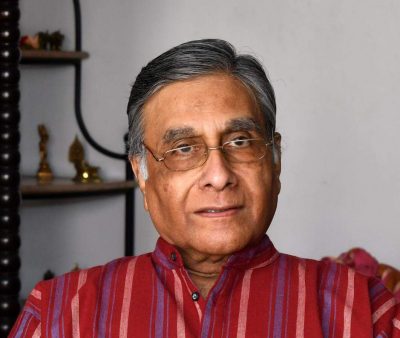 Rehearsals are now on at a hall in Alwarpet.

Ramakrishna says he has been wondering why such a landmark legal case that rocked the city and state has not been made into a film or even a play and he has chosen to create a English docu-drama now. It is titled ‘Lakshmikanthan’.

In the murder case, two major Tamil film celebrities of that era, M. K. Thyagaraja Bhagavathar and N.S. Krishnan, were among the accused.

It was a jury trial ( in fact, the last jury trial of the Madras High Court), presided over by an English judge. The renowned P. V. Rajamannar was the Advocate General leading the prosecution, while the highly regarded K. M. Munshi ( the founder of Bharatiya Vidya Bhavan), was the defence counsel.

Lakshmikanthan was a sleaze journalist, who, through his magazines, Cinema Thoodhu and, later, Indu Nesan, wrote sordid stories on the amorous activities of film stars and other prominent personalities of the time. He even resorted to blackmailing several of them. Thyagaraja Bhagavathar and N.S.Krishnan were among his victims.

Unable to tolerate Lakshmikanthan’s scheming methods, it was alleged that a conspiracy was hatched to murder him, and that Thyagaraja Bhagavathar and N. S. Krishnan were part of it.

Lakshmikanthan was then attacked in broad daylight in the city by two persons and stabbed. He died the next morning in Govt. General Hospital.

Thyagaraja Bhagavathar and Krishnan were arrested, along with six others in this connection, and brought to trial in this celebrated case of the Madras High Court.

Ramakrishna says that his docu-drama, based faithfully on the actual trial transcripts of the case, presents the case in dramatic form.

The Madras Players will bring this story to the stage some 75 years after the case was fought in court. This is a ticketed show.