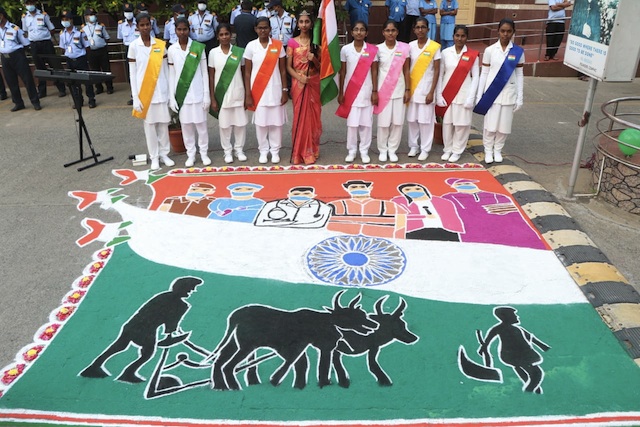 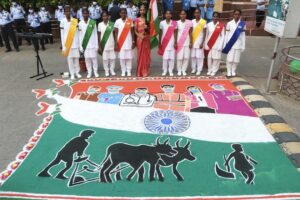 While the hoisting of the Indian flag, the parade and mach-past went on on the Marina as part of the state’s official Republic Day celebration, there were many spots in the Mylapore zone where communities got together to mark this day.

Soon after the Holy Mass at Our Lady of Guidance Church in Luz, the people who attended it came out and joined the priests in hoisting the national flag and sharing sweetmeats.

The community of Ramakrishna Nagar in R. A. Puram got together at the Chennai Corporation park in the area and unfurled the national flag and saluted it; many children participated.

The nursing course students at St Isabel’s Hospital, Mylapore lent some colour to their own event – with the women drawing a thematic Rangoli inside the colours of the Indian tri-colour and some of them wearing sashes and one dressed as Bharat Mata. ( seen in the photo used here)

At R. R. Sabha, the managing team and the security guards saluted the Indian flag after it was hoisted here on Sundareswarar Street, Mylapore.

Metres away from the sabha, management heads and teachers did the honours at the campus of Sivaswami Kalalaya School. Due to pandemic regulations, students were not encouraged to attend.

Since students were restrained, the buzz that is created at the R-Day event was missing in the campus zones of the area,

In CIT Colony, the community gathered at the Chennai Corporation park to hoist the flag and salute it.

So did the community in Mandavelipakkam, where some of them gathered at the Kalyan Nagar Association premises to do the day’s honours.

Similar events were held across the neighbourhood.

If you took part in one such event, do mail a note on the event – to mytimesedit@gmail.com