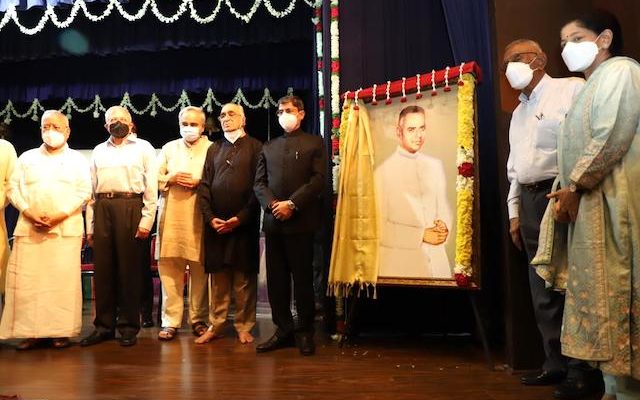 The unveiling of the portrait of late industrialist and philanthrophst K. Anantharamakrishnan was on top of the agenda at the launch function of the December season music festival of Bharatiya Vidya Bhavan in Mylapore on Friday, November 26.

Present to do this honour was the patron’s grand daughter Mallika Srinivasan who heads TAFE company and is on the boards of a few companies.

While speakers recalled how K M Munshi, founder of the Bhavans made a connect with Anantharamakrishnan who owned the property where the Bhavan in Mylapore stands today and how this donation was made, writer-historian V. Sriram, one of the special guests recalled that the property originally belonged to advocate Jayarama Iyer and his wife Alamelu.

Sriram, while tracing the founding of the sabha culture in colonial Madras, in the late 19th century highlighted the role played by Alamelu in promoting Carnatic music. Being a passionate rasika, she went on to found and manage a sabha in Muthialpet ( north Madras) and cleverly managed music fests to raise revenues in order to pay artistes and meet expenses.

Sri Kapaleeswarar Temple’s aasthana nagaswaram vidwan, Sembanar Koil SRGS Mohandass and his troupe began the event with their concert. The rain had taken a big break, enabling a sizable number of people to attend the function. And all of them wore masks – the governor also reminded them of the protocols in his speech.

Artistes Rajhesh Vaidya on the veena, U Rajesh on the mandolin, Patri Satish Kumar on mridangam and S. Karthick on the ghatam later performed the first concert of the fest that runs till mid December, is open to all and is also webcast on webcast on www.bhavanschennai.org.