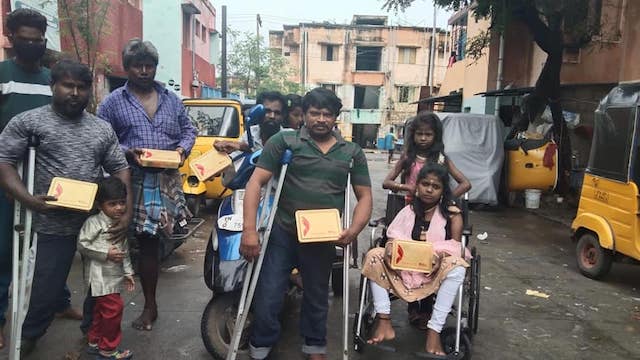 Even as the promoter of the Nithya Amirtham restaurant and sweets store chain, K. Parthibhan got busy on the days leading to Deepavali, to cater to the steady stream of orders, he set aside some time to also cater to the less privileged.

There was a call from a NGO called Grace Trust that Mary Amutha runs, a call for some goodies that could be given to the handicapped and the poor in colonies on the fringe of the city.

Parthibhan got his team to ready boxes of assorted sweets and snacks and send them across. Among the people who received the goodies were the handicapped in Kannagi Nagar and the poor in  Annai Sathya Nagar, where the NGO works.

“We have donated lunch packs in the past but since it was Deepavali we packed sweets this time around,” said Parthibhan who manages the Nithya Amirtham restaurant on Mylapore’s North Mada Street.

This is the group’s first restaurant; a second was launched in Perambur. Their sweets and savouries stores are eight now, across the city, with a large and modern central kitchen opened recently in Nerkundram.

“Business has been good after the pandemic slowed down,” says Parthibhan, who enjoys presenting new varieties of snacks and drinks at his restaurants.