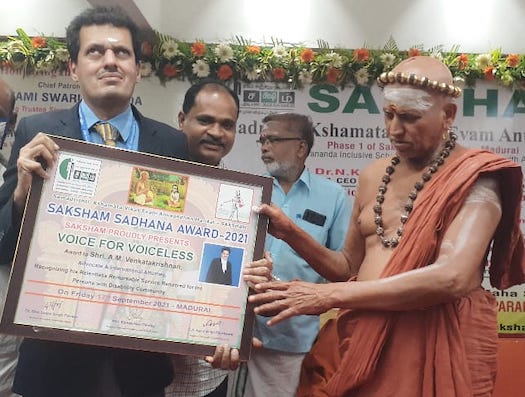 An advocate and international attorney, A. M. Venkatakrishnan who is a resident of Mylapore recently received the National Award for Empowerment of Persons with Disabilities for the year 2020 at an event in Delhi.

He was selected by the Ministry of Social Justice and Empowerment under the category – best self-employed – visual impairment. The award was presented by the President of India on December 3.

Venkatakrishnan’s passion for law started as a self motivated idea. Through continuous support from his family, Venkatakrishnan who has a degenerative condition, Retinitis Pigmentosa, worked hard throughout his school days to learn and excel in academics. His visual condition was something he had from birth.

He says he vividly remembers how his mother would read through his books and he would type the content in his Braille typewriter.

“The contents would then be bound as a book and I used it for the academic year,” he recalls. The entire process took about six months each time for the family and this went on every year till he finished his schooling. The effort paid – he got the top rank and led him to law college.

For his legal studies, Venkatakrishnan studied rigorously by recording lectures in audio cassettes and taking help from fellow classmates to record related contents. Yet again, he proved his ability to excel, by topping the class in law school.

When he was all set to practice, he was taken aback when prospective clients declined to give him cases quoting his visual challenge as a reason. With the help of his senior, V. Narayanaswami, he started handling a few cases. By arguing and winning those, he started to prove that the perception people had about him was entirely wrong.

At present, Venkatakrishnan has a clientele of many corporates who not only engage with him but also retain his services year after year. Leading a team of 40 colleagues spread across Chennai, Hyderabad, Bangalore and New Delhi, he now practices across India.

Venkatakrishnan also encourages visually-challenged law students to join his team and work towards the upliftment of society.

He resides in Mylapore with his wife and two kids.