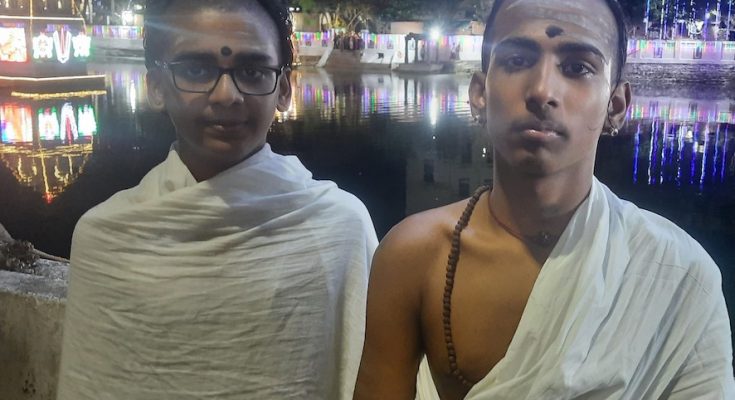 For two 15-year-old Vedic students, this week has proved to be a special experience – they made their ‘Teppam’ debut at the Sri Kesava Perumal float fest.

KVR Sastha and K Pranavanathan are learning the Krishna Yajur Veda. For the first time in their lives, they entered the float this week to present their Vedic verses during the teppam in the Chitrakulam.

While the Prabhandham scholars were reciting the sacred verses of Kulasekara Azhvaar on Wednesday evening, the third day of the teppam, the two teenagers were sitting on the other side and presenting Shaaka and Samhithai during the first two rounds of the float.

Sastha, who hails from Hyderabad and is here in Mylapore full-time at the gurukulam, says that “it was a truly devotional experience” for him to have presented the verses during the float festival.

The two are students of the Vidya Saraswathi Maha Periya Niyama Adyayana Gurukulam in Mylapore.